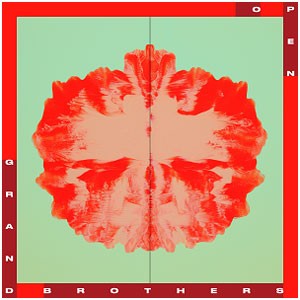 Grandbrothers are the sum of unique parts: Progressive Swiss engineer/mechanic/software designer Lukas Vogel and German-Turkish pianist Erol Sarp. Their second album ‘Open' twins Sarp’s piano skills with Vogel’s talent for both building the formidably intricate mechanics with which he exploits his partner’s instrument and also designing its software. Sarp works at his ivory keyboard while, from behind his own computer keys, Vogel live-samples his partner’s notes, triggering further effects with the aid of a homemade apparatus that physically manipulate the piano’s strings and body. They have essentially built an analogue drum machine out of a grand piano. Nerd out! Creating a new shade, a new dimension, a new generation of atmospheric krautrock with the piano at its core.

Their ambitious second album ‘Open' explores dimensions at which their debut ‘Dilation' only hinted. The greatest revelation for anyone hearing them the first time remains the element constant to everything they’ve recorded: every individual sound that Grandbrothers make stems from one single instrument, a piano. No wonder their music was once memorably described as “open heart surgery on a grand.”

“What makes things work,” Vogel concludes, “is that we are such different personalities, with different skills, which fit together so well.” Sarp concurs: “Our music comes from a mixture of really intense analysis and simply doing things. I can calm him down, and he can incite me. He’s not just a colleague, but one of my closest friends.” Such synergy – born of an innate understanding and intuition, personally and musically – can be heard throughout Grandbrothers’ technically innovative, thrillingly distinctive work: two ingenious minds, perfectly in tune, relentlessly exploring new ideas. Keep your mind Open.