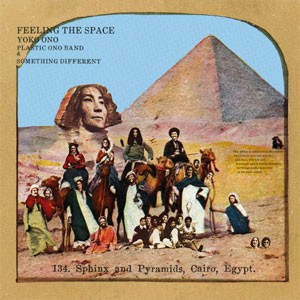 If you’ve listened to ‘Feeling The Space’, Yoko Ono’s personalis- political 1973 album, it should come as no surprise that the once-reviled artist is inspiring a new generation of activists in 2017.

On such songs as the righteous chant ‘Woman Power’, the empathetic ballad ‘Angry Young Woman’, the hilarious protogrrrl ‘Potbelly Rocker’ and the satirical ‘Men, Men, Men’, Yoko sings in surprisingly straightforward fashion about the burdens carried by women and the mandate for feminism.

Supported by such skilled studio vets as guitarist David Spinozza, sax player Michael Brecker and drummer Jim Keltner, this is perhaps Yoko’s most accessible album and her most intimate.

‘Feeling The Space’ was recorded during the time when the avant-garde visionary artist became estranged from her rock star husband John Lennon. He plays only briefly on the album (billed as Johnny O’Cean); she produced and wrote all the songs. The result is a definitive soundtrack / document of the era of consciousness raising and of radical critique of the family structure. Yoko and company deliver this hard message soft rock style, or as soft as Yoko could get. Yoko was on the front lines of the women’s liberation movement.

Dedicated “to the sisters who died in pain and sorrow and those who are now in prisons and in mental hospitals for being unable to survive in the male society,” it’s an emotional exploration of the psychological toll of oppression.

Available again for the first time in decades.

Yoko OnoYes, I'm A Witch Too