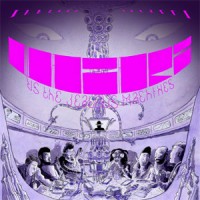 "Quazarz Vs The Jealous Machines" is one of two new albums by interstellar hip hop enigma Shabazz Palaces - aka Ishmael Butler (who, in another galaxy, performs in Digable Planets) - and Tendai Maraire. "Quazarz Vs The Jealous Machines" and its simultaneously released companion "Quazarz: Born On A Gangster Star" were both produced by Knife Knights (i.b e.b.) and mixed by Blood. We've loved Shabazz Palaces here at Piccadilly ever since Michael Riley would burst into the shop at the start of a weekend shift exclaiming - "WAT A SATADEE MAARNIN!!" - instructing us of the delights of this cosmic-rap poster boy. Occupying the same interstellar recesses as Dean Blunt / Hype Williams, Earl Sweatshirt and, (tenuously) to perhaps Ratking; this is the true new school folks, abandoning hip-hop and rap's tried traditions, ditching all that's come before it for something completely new and invigorating, more in common with Burnt Friedman and Mark Ernestus than the ghosts of rap music's past. Still gritty and streetwise, but unfathomably futuristic and wrapped in celestial space dust, the album works as a whole journey, beautifully sequenced and elegantly constructed. Essential music for the right now. Recommended.

Barry says: Crisp futuristic hip-hop beats, clicking trap snares and stellar production make this duo of outings a forward-facing and revolutionary take on the ol' hip-hop game. Part 'hop, part 'tron and fully embracing the future, this is but one half of todays hip-hop revolution.