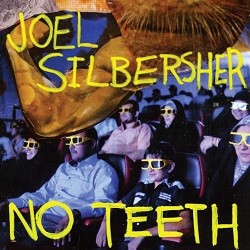 A long time in the making, this “solo” offering from Melbourne underground /outsider rock legend or indeed mainstream collaborator and sideman, Joel Silbersher cranks up the hiss and crackle with three absolute classics, an original and two cover versions…all displaying Joel’s idiosyncratic take on the blues, or folk.. or indeed soul music. For it is that which burst forth on this essential 45.. almost a Beefheartian guttural (from the gutter, and indeed the gut…) growling from Silbersher makes these songs his, and ultimately..yours....

Featuring assorted members of the Drones (Liddiard / Noga) on various instrumentation, the a-side – “No Teeth” is a Silbersher original, it sparks and spits with huge wit and snarl..making a mess / meal out of the blues..a true visceral outburst! … on the b-side, there’s two covers… a take on Bill Withers’ “ I Don’t Want You On My Mind” which emboldens the smooth soul with a vitriolic preaching of good, common sense… and then The Holy Modal Rounders’…”Half a Mind”…an urgent and exuberant take to put it mildly!! Theres 500 of these being made, don’t be a dope and miss out!

Brief Bio from Joel Silbersher:
'Rock n Roll Turtle' Joel Silbersher ( Hoss/God/Headland/Dark Horses/Tendrils/Greasy Lens main man)…presumably done nothing for ages, presumed useless...Swelling slowly back to tumescence with half constructed slugblues hit of the century soon to be covered by the ghost of the Winter brothers.... Ancient turtle wisdoms shared now for betters or worst. Couple Drones present and past playing with Abbadon, I mean abandon. Bill Withers tune which preaches good sense...Exuberant approximation of Rounders song.