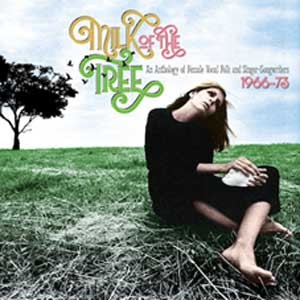 Notwithstanding one or two isolated exceptions, it wasn't until the mid-Sixties that independent female voices really began to be heard within the music industry. The feminist movement naturally coincided with the first signs of genuine musical emancipation. In North America, Joan Baez and Buffy Sainte-Marie emerged through the folk clubs, coffee-houses and college campuses to inspire a generation of wannabe female singers and musicians with their strong, independent mentality and social compassion, while the British scene's combination of folk song revival and the Beatles-led pop explosion saw record company deals for a new generation of pop-folkies including Marianne Faithfull, Dana Gillespie and Vashti Bunyan.

Within a year or two, the burgeoning counter-culture saw the arrival of psychedelia and folk-rock as the likes of Pentangle and (in the US) the Linda Ronstadt-fronted Stone Poneys emerged from the clubs and into the charts. But in America at least, burnout soon set in, and the era's excesses duly gave way to a quieter, more reflective musical and lyrical style. The LA rock and folk communities decamped to Laurel Canyon, in the Hollywood Hills region of the Santa Monica Mountains, to chill out in bucolic, soul-searching introspection, with sixties stalwart Jackie DeShannon's 1968 album Laurel Canyon leading the way.

Over the course of four hours and sixty tracks, Milk Of The Tree focuses on the music made in the late Sixties and early Seventies in both Britain and North America by either female solo artists or acts with featured female vocalists. Along the way, we encounter San Franciscan psychedelia, LA folk rock, Swinging London pop-folk, electric folk, progressive folk and even folk club folk as well as (of course) a plethora of singer- songwriters (including various ladies of the Canyon) from the movement's golden age. As well as featuring most of the leading figures from both sides of the Atlantic, Milk Of The Tree includes many performers who received little attention at the time but who now have a cult reputation amongst collectors. A significant number of tracks were unreleased at the time, while the set also includes the first-ever appearance by pioneering female rock duo Emily Muff, two American girls who were based in England during the period in question but failed to land a recording contract.

With a 44-page booklet crammed with rare photos and details of the various acts featured, the clambox-housed Milk Of The Tree is not only a fascinating social document but, we hope, a hugely entertaining snapshot of a particular time, place and frame of mind that produced some enduring, spellbinding music.

Disc One:
1. Do You Believe - Melanie
2. Blessed Are... – Joan Baez
3. Light Flight – The Pentangle
4. Foolish Seasons – Dana Gillespie
5. Someone To Talk My Troubles To – Judy Roderick
6. Auntie Aviator - John & Beverley Martyn
7. Flying Away – The Serpent Power
8. It Could Have Been Better – Joan Armatrading
9. Morning Morgantown - Jude
10. If Not By Fire – Mandy More
11. Upstairs By A Chinese Lamp – Laura Nyro
12. I Thought I Knew The Answers – Susan Pillsbury
13. Give Her The Day – Jaki Whitren
14. By The Sea – Wendy & Bonnie
15. Come And Stay With Me – Jackie Deshannon
16. Something Better - Marianne Faithfull
17. An Everyday Consumption Song - Spirogyra
18. The Milk Of The Tree – Polly Niles
19. Chelsea Girls - Nico
20. Reverie For Roslyn – Mary- Anne