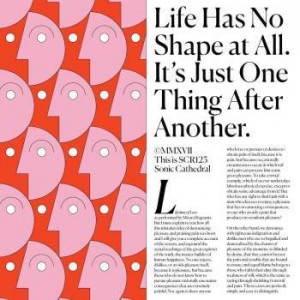 Lifetime of Love is the debut album by Moon Diagrams, the solo recording project of Deerhunter co-founder and drummer Moses John Archuleta. Gradually pieced together over a ten-year period, it finds Archuleta processing various stages of love, loss and regeneration via forlorn outsider pop, minimal techno and warm, weightless experimentation. Hymnal opener “Playground” has echoes of Eno and Grouper; lengthy workouts such as “The Ghost and the Host” recall long-lost Harmonia outtakes, or something from one of Warp’s Artificial Intelligence compilations; the bitter pill pop of “End of Heartache” has the scratchy guitar of New Order circa Brotherhood and the square pegness of Dazzle Ships-era OMD. Several songs are instrumental, while “Bodymaker” features Sian Ahern (Eaux, Sian Alice Group). Subtly grandiose and quietly epic, Lifetime of Love really does live up to its title: a hopeful and curious beginning makes way for a morose middle, before a bittersweet, optimistic end.