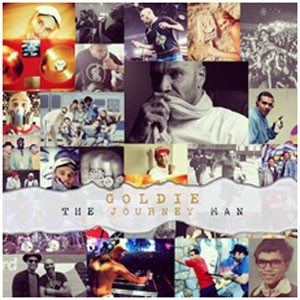 22 years ago saw the release of Goldie’s debut album "Timeless" which truly changed the face of drum’n’bass, hardcore and jungle. The seminal record featured the iconic track "Inner City Life" - the vocals for which were performed by the late Diane Charlemagne. In 2011, The Guardian described the release of "Timeless" as one of the '50 key events in the history of dance music'. MOBO Award-winning songwriter, DJ, producer, visual artist and actor Goldie (MBE) returns on his culturally iconic Metalheadz label. Collaborators on "The Journey Man" album include vocalist and songwriter Natalie Duncan, Terri Walker, Tyler Lee Daly, Natalie Williams, Jose James, Naomi Pryor as well as Goldie’s wife, Mika Wassenaar Price. Goldie is also one of only a handful of artists ever to co-write with David Bowie - on the track ‘Truth’ from the drum‘n’bass pioneer’s second album, "Saturnz Return" released in 1998 (and also featuring one Noel Gallagher and KRS-One!). It's nice to see this revolutionary producer's not strayed too far from his roots on this new outing. A smattering of upbeat and celebratory d'n'b awaits, alongside hard edge steppers, future jazz and liquid rollers aplenty. The vocal work is, as expected, sublime and there's some well timed, well poised bursts of relaxed, downtempo business with Goldie maturing into timeless moments of jazz and soul with a strong musical ear throughout.