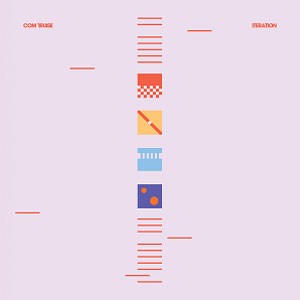 It was 2011's 'Galactic Melt' that really opened my eyes to the neon synthwave streaks and pulsing bass throbs of Seth Haley's Com Truise productions. Like a simmering mix of 80's Italo, and the more modern soundtrack emulations of Pye Corner Audio, Xander Harris, Panabrite etc. Fast forward 6 years,  during which there have been one studio album and 2 EP's and we get the majestic 'Iteration'.

Kicking things off with the dystopian shimmer of '...Of Your Fake Dimension' , led with a downtuned oscillator stack and skittering noisy hats, it sets the pace nicely without giving too much away, acting as an amuse oreille for the glowing journey that is to come.  'Ephemeron' takes things into another gear altogether, despite the reticence of the opening passage, things quickly build into a cacophony of echoing Linn drums and richoteing saw waves, underpinned by an ever-reliable machinated hi-hat flutter. 'Dryswch' weaves simmering pads together before leaping into a brutally fragmented bassline, twisting and turning around the solid foundation of hi-passed kicks (it is unusual for the drum parts to sit so high in the frequency spectrum, with most of the bass 'heavy lifting' often accomplished here by the bass guitar, the drums sitting in the low mids perfectly accentuating the throbbing churn of analogue oscillators).

Move a little further along and 'Propagation' gives us the first truly anthemic taste of an Italo summer stormer, with corused pads and sidechained chords giving way quickly to a glitched-out two-part discussion between pummeling staccato bass and FM synth stabs before breaking down once again into glassine chorused keys and 16th note clattering percussion. It's a formula that is tried and tested, but injected with the off-kilter production quirks so recognisable as Haley (automated distorted fragments and stuttering filtered degradation being a big part of his sound), leaving the listener conforted but fascinated in equal measure.

It is a stunning collection, supremely memorable, and warmly dynamic. There are moments of serene beauty and melancholic anthems, equally at home on the dancefloor as played at home for a gathering with friends. If they don't like it, get new friends.

Barry says: I always knew I liked Com Truise, there was just something that resonated with me (no pun intended), but never has it had as much of a pull as 'Iteration'. Stripped back into the constituent parts that made CT's music so enthralling without the sometimes distracting frenetic background makes this an unrivalled modern synth classic.