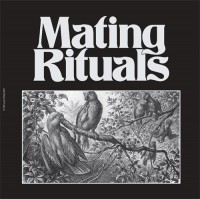 After a slew of well received releases for the likes of Rose Records, Razor-N-Tape and Lazare Hoche, Leipzig house head Martin Hayes kicks off his Mating Rituals imprint with a fresh 7" of woozy house delight. The set opens with the tape chewed strains of a battered player piano, a medicated love motif and a rush of unavoidable infatuation. The skipping percussion and occasional bass bleep forming the rhythm for those first steps of pair-bonding. "Histoire D'Amour" is soft and gentle like her rouged lips but rough like daddy playing the piano while sipping on Japanese whisky. Clangers keys and a distorted kick force their way through a wall of surface noise as Hayes lays down the oddest downbeat jam you'll hear all year. On the flipside "Les Fantasmes De Joyce Kinney" lurches through the blurred and drifting colours of a seventies lovebeat theme, picking up the wooze of a wonky hop heat-beat. Last but not least, "The Clamdigger" conjures images of wood-paneled rooms, Cuban cigar smoke, drab tweed suits and Jasmine serving that fine Remy martin cognac.

A1. Mating Theme
B1. Histoire D’Amour
B2. Les Fantasmes De Joyce Kinney
B3. The Clamdigger