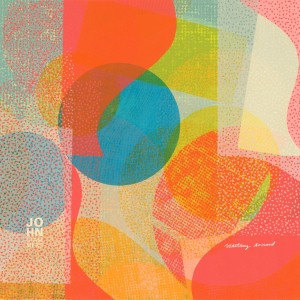 Whilst their influence would not sit so brazenly on John’s rolled-up sleeves, each one possesses inspiring techniques; “I deliberately listen to how music is recorded and put that into my process,” John explains. “A lot of percussion in exotica stuff or Indian, South American folk gives me ideas. Things like a distorted reggae hi hat or a backing vocal that’s way too loud and bleeds all over the other musicians – I like natural accidents which you only get with tape.”

Fittingly titled, Waiting Around is the fruits of melodic craftsman, John Stammers’ labour. Arriving no sooner than six years since the release of his 2011 debut; a physically demanding day job and fascination for all things analogue has made way for a record of stark beauty and enduring quality - delayed only by an unyielding sense of intrepid experimentalism.

Sounding like its own reel of ticker tape, Waiting Around is punched with even more magical moments; given its name, it’s a wake-up call (“It means you’re wasting your life and not being as productive as you or I should be!” John says), whilst beautifully warm songs recall friends as well as past and present loves. ‘Stepping Round Her Clothes’ captures the feeling of being young and in love whilst fiancée Yasmin plays a starring role in ‘Woman.’ “’Risky Flowers’ is about a troubled young man I knew who smoked heroin; he didn’t do it regularly but then I once met him and he looked bad. People said they didn’t recognize him. Then I didn’t see him for ages – that was three years ago,” John says.

Produced by Jim Spencer (The Charlatans, Bert Jansch), Miles Copeland (Superimposers), and Dan Munslow (The Monks Kitchen, Luca Nieri), the album was recorded in Eve studio, nestled in Manchester’s city suburbs. “The idea was to book the studio for two weeks and rehearse in my cellar,” tells John. “We got to choose which tape machine to use, synths, compressors – the perfect place to record if you’re geared to analogue and like 18th century chapels.”