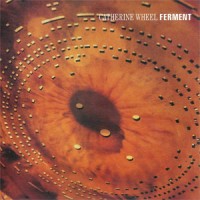 The heavily sought after debut album Ferment by Catherine Wheel is finally pressed on vinyl again!

In 2016, Pitchfork ranked the album at number 23 in their list of “The 50 Best Shoegaze Albums of All Time,” with Ben Cardew of the website commenting that “a good half of the songs on Ferment, their debut, are enduring shoegaze-disco classics, while “Black Metallic”, in its full seven-minute glory, makes a strong claim to being the genre’s ‘Stairway to Heaven’.”

Ferment is the band’s most unique record; it serves as a fitting lens through which to view the group’s work throughout the 1990s. The album displays Catherine Wheel’s early attempts to meld drone-drenched shoegaze with heavy rock.

After all these years, it is the record’s twin epics, “Black Metallic” and “Salt”, that immediately illustrate why Catherine Wheel was so meaningful to so many of the bands that came after them. “Black Metallic”, perhaps the group’s most famous single, is absolutely otherworldly.

Andy says: Superb LP from the early nineties which was cruelly overlooked in the fallout from shoegaze. This is actually one of the greatest albums from that whole era, and time has born that out as it's gone on to garner massive cult status. If you're a fan of that genre (loved by the peeps, derided by the press) then you need this record.