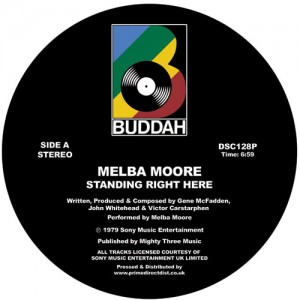 Dope deep disco double header alert! Topside is Melba's Philly anthem, the bubbling McFadden and Whitehead penned and produced "Standing Right Here" which put Melba on a more credible path after her early naff hits and remains an underground anthem to this day. Swooning philly strings, lush orchestration and a killer groove make the perfect companions for Melba's mighty pipes. Mint original copies of the U.S. 12" are currently around the £20-30 mark, so this is a steal. Stick with the real deal from the original masters! The flipside has never been released on 12" before. Yes! Melba's stunning version of the Curtis Mayfield penned classic "Make Me Believe In You" (originally done by Patti Jo) finally gets it debut release on 12" single, with its full LP run-time. More uptempo than Patti Jo's version, this is peaking, passion filled disco funk at its finest so don't miss out!

Patrick says: Essential disco re-ish action here as two of Melba's biggest hitters find their way onto a dope double header. On the A-side we have the swooning Philly vibe of Melba Moore classic "Standing Right Here", while the flip boasts her lesser known but oh so dope version of "Make Me Believe In You". Ace!