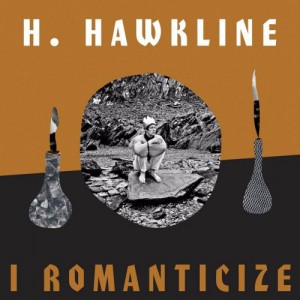 ‘I Romanticize’ (like its predecessor and Heavenly Records debut, 2015’s ‘In The Pink Of Condition’) was recorded at Samur Khouja’s Seahorse Sound studio in Los Angeles with all the lyrics written and then vocals recorded in Narberth in west Wales along with Josiah Steinbrick - LA composer and producer - and Warpaint’s Stella Mozgawa. “They were the absolute best people for the job, and I also happen to be lucky enough to call them friends. Without their hands and ears the wet clay would have collapsed,” said Huw.

“This has been the first record I’ve made where I’ve felt as if everything came completely naturally, like post that comes with a handwritten address,” says Huw Evans of ‘I Romanticize’. “It fell together like a cat onto the floor.”

Here, too, are wobbly psych guitars, punchy powerpop earworms and lyrics which observe the world through a fragmented lens yet synths and pianos are much more prominent than on any previous H. Hawkline release (he released his debut ‘A Cup Of Salt’ in 2010 and followed that the following year with ‘The Strange Uses Of Ox Gall’). This is exciting, uncharted territory for H. Hawkline, who says: “To my ears it’s pretty accessible pop music, but maybe there’s something wrong with my ears.”