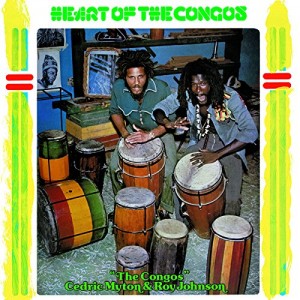 Right now, you have in your hand (or browser) a total classic. Not a reggae classic, or roots classic (though either statement would be true), but a classic record amongst all the other records that ever there were. Recorded at Black Ark in 1977 and mixed by Lee Scratch Perry and Scientist, "Heart Of The Congos" finds Cedric Myton and Roy Johnson treating us to ten superlative, spiritual reggae cuts. All over the tracklisting you'll find infectious grooves, soulful vocals and yearning lyrics, all wrapped in those strangely psychedelic audio effects Perry and Scientist made their own. In "Fisherman" and "Congoman" you have two of the finest tracks ever to leave Jamaica and the religious riddim of "Can't Come In" on the flip could make any heathen into a true believer. 20 years after the release of Blood & Fire’s outstanding but now deleted ‘Heart Of The Congos’ reissue, VP Records /17 North Parade release a definitive, 2017 remastered 3CD & 3LP edition, put together with both respect and gratitude to that illustrious antecedent. This new deluxe 3CD & 3LP editions are the first to feature the now almost impossible to find original mix of the album, unavailable since producer Lee Perry withdrew the set in 1977. Also includes the more well-known re-mix, dubs, disco mix, seven and twelve inch versions and ‘Don’t Blame It On I’ an overlooked previously unreleased track unearthed, too late to include on the Blood & Fire release, by Steve Barrow and David Katz in 1997. Buy a copy, put it on your turntable and thank me later.