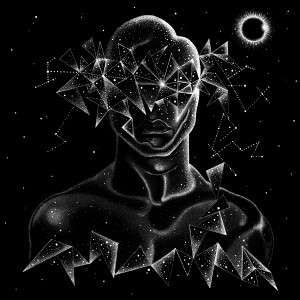 Twinned with "Quazarz Vs The Jealous Machines", this companion album from Shabaz Palaces also shines and growns under the crushing weight of the future. Imbued with the energy and ideas from all the creative embers floating in the atmosphere like fireflies, Shabazz Palaces recorded this entire album over the course of two weeks with Blood in Seattle. New gear and new equipment disintegrated comfort zones into dust and a new path appeared in the rubble - aurally evident thoughout this painfully visionary album. "Born on a Gangster Star"  continues the intrepid and unfathomable quest through cosmic-rap, a genre that SP is practically inventing. The beats wobble and ricocheting as if unaffected by gravity, while Palaces' vocals are hushed, ushered and delivered with a biting effeciently which has had me previously drawing comparisons to Dean Blunt / Hype Williams and Earl Sweatshirt. Appearing here, in body or in spirit, are Julian Casablancas, Thundercat, Darrius Willrich, Gamble and Huff, Loud Eyes Lou, Thaddillac, Ahmir, Jon Kirby, Sunny Levine, and Blood. This, my friends, is the sound of the near future.