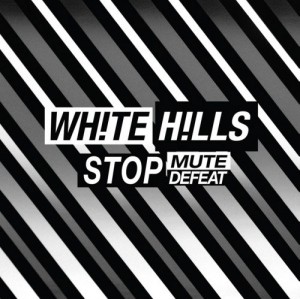 “White Hills have emerged from its deep sheets of psychedelia and smoke machine-cascading haze, glaring lights and all-out noise for a sinister beast of minimalist psych grooves and seductive danceibility.” - Noisey

“A prolific band with a restless streak.” - Paste

“A staple on the touring circuit where their explosive fusion of psychedelic, space rock, post-punk, krautrock, and ambient experimentation makes their performances feel less like traditional rock shows and more like full body and mind experiences.” - She Shreds Magazine

Having continually refined their sound, pushing the boundaries of psychedelic music, White Hills have flipped the script on their new album, ‘Stop Mute Defeat’. Members Dave W. and Ego Sensation have brazenly produced an industrially-charged record that pulsates unlike anything they’ve released before.

Mixed by Martin Bisi (Sonic Youth, Brian Eno, Afrika Bambaataa), the album was influenced by dance hall, drug den and bar, the Mudd Club - New York’s legendary haunt in the late 1970’s. Following similar techniques to those propagated by William S. Burroughs (a regular at Mudd Club), ‘Stop Mute Defeat’ sees White Hills break free from the guitar-driven structure of their earlier releases and create sounds that call to mind ‘Xtrmntr’-era Primal Scream or Cabaret Voltaire. Despite the band’s newfound approach, their criticisms of rampant consumerism and the proliferation of post-truth mythology are at their most scathing.

Barry says: Brain-meltingly psychedelic breakdowns, grooving sludgey walls of sound and cosmic synth swells, all accentuated with distorted vocals and churning industrious bass. I loved their album with Manc psych-nutters Gnod, and I love this just as much. You will too.