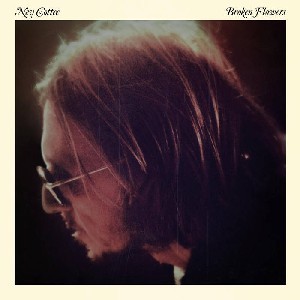 Caught somewhere between the rain-drenched streets of Manchester and the sun-beaten deserts of America lies Nev Cottee’s third album Broken Flowers. A deeply cinematic, string-soaked album rich in atmosphere and brooding ambience. Its origins however, began in India, with Cottee trying to leave rainy-city heartbreak behind.

“I hate the English winter. Really can't stand the grey days. So I shipped out to India in January 2016. I found a place and set up a simple studio to demo out there”. Rising at dawn each day the ideas began to flow and quickly enough 20 new songs began to take shape, “Maybe the new surroundings helped - getting out of my comfort zone, getting away from all the shit one accumulates at home".

The songs, even in sparse demo form, captured the plaintive tone of Cottee’s vocals slowly unfurling in emotional waves - the gentleness reminiscent of Spiritualized’s Jason Pierce but with the rich warm resonance of Lee Hazelwood. Cottee then took the songs to Wales to work with previous collaborator and producer Mason Neely (Lambchop/Edwyn Collins). Neely brought in some classical musicians, “cut away the flab” and pushed the songs to their extremes - the producer's intuitions and abilities clearly trusted by Cottee, “On the album notes it says 'Mason: Sounds' and that's him in a nutshell. He brings so much to the table and gives the album it's sonic identity - I can't give him a bigger compliment than that.”

Whilst the finished album hums with quiet beauty - dense swirls of ambience hanging in the air as elevating strings cascade through - there’s also a darkness, “Although I recorded during the day this is a night time record. It’s dark and introspective. I find that juxtaposition hugely creative. The night in India can be quite a foreboding place. Me and a mate would make late night excursions inland - into the heart of darkness. Not quite Apocalypse Now but enough to take you out of any semblance of comfort. We saw some strange things, weird village ceremonies, people biting snakes' heads off... the songs represent a physical and mental journey.”

Laura says: Mojo have likened Nev to a bedroom Ry Cooder, and you can see what they mean on this album. The songs have a sparse, atmospheric, desert soundtrack feel, albeit drenched in rainy city melancholy. Lovely stuff.