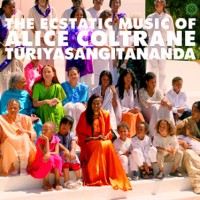 As some of you may know, Alice Coltrane was a legendary pianist, composer, spiritual leader, and the wife of John Coltrane, the most venerated and influential saxophonist in the history of jazz. In 1967, four years after meeting John, he died of liver cancer, leaving Alice a widow with four small children. Bereft of her soul mate, Alice suffered sleepless nights and severe weight loss. At her worst, she weighed only 95 pounds. She had hallucinations in which trees spoke, various beings existed on astral planes, and the sounds of “a planetary ether” spun through her brain, knocking her into a frightening unconsciousness. The critical event of this period was not that Alice fell into the nadir of her existence, but rather that she experienced tapas, a vital period of trial. These tapas (a Sanskrit term she used to describe her suffering) helped prepare Alice for the spiritual ally she found in Swami Satchidananda, an Indian guru, with whom Alice made her first trip to India. On her second trip there, Alice had a revelation instructing her to abandon the secular life and become a spiritual teacher in the Hindu tradition – so she moved out West – eventually opening the Shanti Anantam Ashram on 47 acres she’d bought in Agoura Hills, California. Music was the foundation of Alice’s spiritual practice. From the mid 1980’s to mid 1990’s, Alice Coltrane self-released four brilliant cassette albums. These cassettes contained a music she invented, inspired by the gospel music of the Detroit churches she grew up in, mixed together with the Indian devotional music of her religious practice, and even finds Alice singing for the first time in her recorded catalog. Originally only made available through her ashram, they are her most obscure body of work and possibly the greatest reflection of her soul.

Patrick says: You know you're onto a good thing with a Luaka Bop reissue (check William Onyeabor for further proof…), and this Technicolor retrospective of the sublime Alice Coltrane shows the multi-instrumentalist at her most spiritual. Originally availably (barely) on self released cassettes dating from the mid 80s to mid 90s, the tracks on this double LP find Alice fusing gospel harmonies, Hindu mantras, hypnotic percussion and soaring, searing Carl Craig style keyboards. Perfect as an introduction or celebration of Alice's inspirational energy, this mind-blowing, life affirming set should have us all vibrating as one.