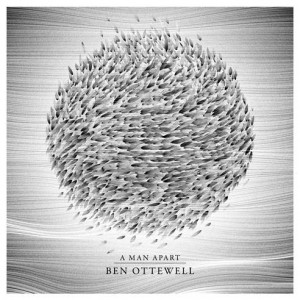 With an avid following from the days in his former band Gomez, A Man Apart is singer/songwriter Ben Ottewell’s third solo offering and follows his albums Shapes and Shadows and Rattlebag. The album is a record that crosses musical genres such as Americana, blues and folk backed by Ben’s unmistakable gutsy and gravelly voice. Co-written with childhood friend and former Tunng member, Sam Genders, the album was recorded in Los Angeles and Sheffield and engineered and produced in the latter by Martin Smith (Richard Hawley).

A Man Apart delves into such relevant subjects as love and relationships, fame and politics. The album’s title track focuses on populist politicians exploiting people’s hopes and fears, with Bones touching on the realisation of not being worthy of someone, and opener Own It, sees Ben reflect on his time growing up in public in Gomez. New single Watcher is the perfect introduction to the album and despite its pensive meaning, is a melodic Americana led track that builds into a memorable bluesy and soulful chorus. A video for the track will be premiering soon.

Ben says; "A Man Apart is a transatlantic affair written and recorded both here and in the states. It continues to explore my deep love of Americana through a British filter with themes of love, escape, responsibility and loss, written against the unfortunate backdrop of the populist political upheavals and demagogues that have come to dominate here and in the states.: