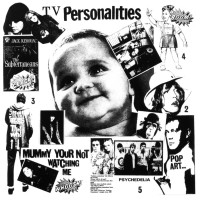 Returning with psychedelic dark masterpiece, Television Personalities’ transitional second record ‘Mummy Your Not Watching Me’ was originally released in 1982 on Dan Treacy’s ‘Whaam!’ label. The album features ‘If I Could Write Poetry’, ‘Painting By Numbers’ and includes songs reminiscent of their earlier sound that can be heard on 'Magnificent Dreams'. With the formidable Daniel Treacy at its core, Television Personalities remain one of new wave’s longest serving and seminal artists with a career spanning over three decades. The indie pop visionaries influenced many people across the industry including Battles, Black Dice, Crystal Stilts, MGMT and Creation Records’ Alan McGee. ‘Mummy Your Not Watching Me’ is reissued for Record Store Day 2017 it will be available on black and white marbled vinyl alongside ‘The Painted Word’, ‘And Don’t The Kids Just Love It’ and ‘They Could Have Been Bigger Than The Beatles’ / “It's a gawky, charming collection of great little pop tunes, clever bits and embarrassing bits, superb songs” Sounds, 1982.