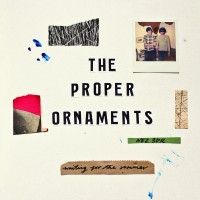 Following the release of Foxhole in January of this year, Tough Love will issue on vinyl for the first time The Proper Ornaments debut long-player, Waiting for the Summer: a compilation of their first 10 songs, originally released on CD in 2013. What they said in 2013… Is perfect pop still possible? It’s hard to imagine, but the answer is Yes, and The Proper Ornaments are here to prove it. A timeless beauty that reminds us of The Velvet Underground and The Jesus & Mary Chain and yet sounds classic and effortlessly original. Produced by Charlie March of NZCA Lines and featuring ten golden nuggets of pure pleasure. James Hoare and Max Claps formed The Proper Ornaments in 2010. The first line up included bassist Michael Lovett and Lets Wrestle front man Wesley Patrick Gonzalez. Micheal went on to form NZCA LINES, but Wes remained part of the tag team thanks to a nifty half nelson and the offer of a night in the corner of London's darkest stages and the theft of his organ….