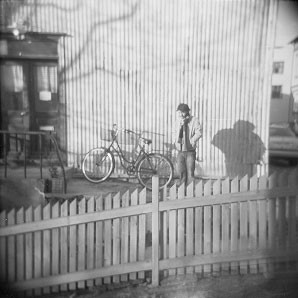 For fans of: Patrick Watson, Joanna Newsom, Devandra Banhardt. A visit to his Plateau apartment in Montreal reveals an endless collection of records from Bob Dylan to Ray Charles. An avid fan of vinyl, Leif wrote half the songs for his own, "Inland", while studying Icelandic and Philosophy in Reykjavik, Iceland. The other half were written upon his return home to Montreal, Canada, where he recorded and self-produced the debut album a short time later at Montreal's Breakglass studio (Wolf Parade, Patrick Watson, Besnard Lakes). Arranged and orchestrated entirely by Leif, "Inland" is primarily centred around Leif’s acoustic guitar and story-telling, featuring string quartets on occasion, piano at times, and splashes of harmonica and drums. Vollebekk, a multi-instrumentalist, is often seen performing solo, playing the violin on stage, using loop-samplers for accompaniment and then switching to electric or acoustic guitars to create a sound similar to the album, but an entirely different experience