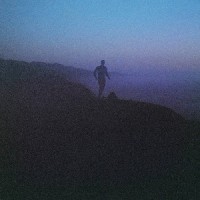 The third album from Philadelphia's Nightlands (War On Drugs’ Bassist Dave Hartley), is an exercise in synthetic nostalgia. Each of the nine songs use meticulous choral arrangements and bittersweet pop melodies to evoke a unique type of longing, not for the past, but for a future that once lay ahead but has drifted out of reach. For Dave Hartley, the artistic force behind Nightlands, the answer is found on an inward retreat, away from the cold static of modern life and into the warmth of love and protection. I Can Feel the Night Around Me showcases Hartley's finely tuned ability to layer his voice and conjure some of the most beautiful and elaborate virtual choirs in modern music. If his first two records were vocal layering experiments, his third stands as Hartley's thesis statement: "I was determined to use vocal stacking to enable my songwriting, not shroud or obscure it."

He recorded most of the album alone in a cold warehouse basement, which he affectionately calls The Space -- it's where The War on Drugs formerly rehearsed and stored their equipment. "The dissonance between the sound of the album and the atmosphere in which it was recorded is pretty striking," Hartley says. Indeed the music seems more geographically inspired by the microclimates of the Lost Coast and the moonrises of Big Sur than the post-industrial cityscape of North Philadelphia. Perhaps his periodic westward sojourns and healthy obsessions with mid-career Beach Boys albums and Denis Johnson's Already Dead: A California Gothic were influencing him more than he was aware.

Despite the warm astral vibes of opener “Lost Moon," the song was born in that unheated warehouse basement during a record-setting blizzard. "I wanted to write a song like Jimmy Webb's ‘Wichita Lineman’," he recalls. "But it didn't come out like that at all. I ended up in a lonely and unexpected place, which was a really nice surprise." The massive "Only You Know”, a cover from Dion's Phil Spectorproduced masterpiece Born to Be With You, blends perfectly with the rest of the album's shades of psyched-out doo wop revivalism If there is an outlier on I Can Feel the Night Around Me, it's the exotica-tinged “Fear of Flying,” which Hartley composed with minimalist synth virtuoso Frank LoCrasto before the two had ever even met. Soft tangles of voice wash up on the shore of the song's warbling synth backbone, pushing the album briefly into the sunlight without sacri¬cing its melancholy, late-night vibe. It's the sound of the earth turning, night falling. Soon it will be dark, but there's still light seeping over the horizon. And that's a beautiful thing.