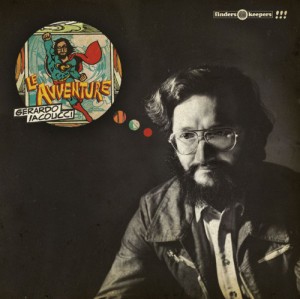 Combining all the traits of an international superhero or intrepid comic book adventurer, the true identity, whereabouts and history of the spectacular Italian composer known as Gerardo Iacoucci has been a mystery to record collectors for many years. As a result of the best efforts of secretive archivists and DJs as well as and the overprotective force field that surrounds the clandestine world of Italian library music, the commanding experimental psychedelic pop music made singlehandedly by this early pioneer of the anti-genre time after time rises to the top of collectors’ want lists, commands huge ransom notes, ignites dancefloors and decimates genre tags before returning to its mythical status as one of the kings of the underworld without removing his mask. Despite the fact that original Italian copies of records by Gerardo Iacoucci are amongst the rarest, enigmatic fixtures of European psychedelia, his music simply refuses to be ghettoised and as the name of this album suggests the history of this artist reads like the memoirs of a genuine musical adventurer as well as a well-travelled prophet of experimental music and unsung pillar of Italian jazz and sound design.

As a published author, recorded musician, professor, film composer, gentleman, musicologist and scholar, Gerardo Iacoucci has managed to cram the stories of nine lifetimes into one heroic existence, while maintaining a humble, earnest and near-mythical status as one of the great lost progressive pop pioneers of one of the most important transitional eras of European music, cinema and general, seldom rivalled, creative super powers. When the needle drops, ‘L’Avventura’ has only just begun.

Continuing their mission to shine light on the genuine anomalies of 70’s Italian production music, Finders Keepers Records resurrects another unlikely transcription disc from the vaults of one of Rome’s most esoteric library music archives.

Finders Keepers Records, in continued collaboration with the Di Barri company, with the Casa/Ducros family blessing, proudly shine new light on this sonic sculptures and provide a fresh context where educated music listeners are ready to fill the gaps between Delia Derbyshire, Ennio Morricone, Suzanne Ciani and Harry Partch and patronise a very welcome considered alternative to the recent rise in popularity of Italian Giallo soundtracks from a seldom savoured feminine creative vantage point.