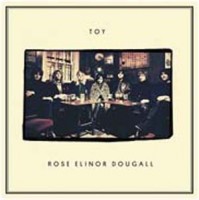 We played a night with Rose about a year ago at The Betsy Trottwood in Clerkenwell. The night was a folk night called called 'Meanwhile Back In The Forest' put on by our friend Will Hodgkinson. We did some Incredible String Band covers and an Anne Briggs cover. As well as a few of our own songs. We had great time doing it and thought it'd be fun to record a few of them at our friends Euan from Young Husband's studio in Greenwich. We did them over a 2 days all in the same room with very few overdubs. Charlie played a little flute at one point. We've all grown up listening to those records so it was really nice to interprete them in our own way and sing with Rose.

We recorded these songs over two cold days in January at Euan's studio, Static TV in Greenwich. These are songs all have us have always loved, and we performed them a couple of years ago at Will Hodgkinson's folk night at the Betsey Trotwood, so it was great to get them recorded. We did it all pretty much live to tape, which gives the whole thing the natural spontaneity of when we first played them.

Anne Briggs is a hero of mine so it was slightly daunting to step into her shoes, so I hope this is a fitting homage to her brilliant music

‘Ride, Ride’ is a cover version of Anne Briggs