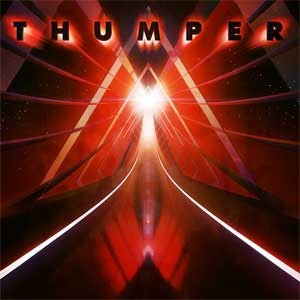 Gibson is a seasoned game artist, working on titles such as Amplitude, Guitar Hero, and Rock Band.

The game Thumper, developed by Gibson with programmer Marc Flury through their studio Drool, has been lauded as one of the best games of 2016, with particular note to the music from the likes of FACT, Paste, IGN, Kotaku, and PC Gamer who called Thumper “one of the best music games ever made,” as well as being nominated for and winning awards for Best Music/Audio from Game Developer’s Choice Awards, IGN Japan, New York Video Game Awards, and more.

‘Thumper’ was also selected by Sony as one of PlayStation’s first releases for their Virtual Reality console when launched in 2016.

“As spartan and laser-focused as Lightning Bolt’s music” – FACT.

‘Thumper’ is released in a limited edition of 500 copies for the UK and Eire.