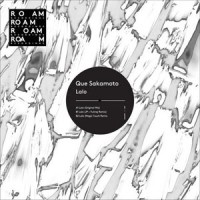 The latest installment of Roam Recordings comes from the Japanese disco scene via the production duo of internationally acclaimed DJ Que Sakamoto and seasoned studio engineer NT. The title track "Lalo" is an original production with a stylish edit of an obscure vocal. This slow paced groove has a lot to offer with its bells chiming, synths drifting, and peppered in vocal that brings it all together. The first remix comes from JP & Vulinej the partnership between JP Soul (boss of Roam Recordings) and Jeniluv (a prominent figure in the LA dance scene and partner in Roam Recordings). Having heard Que Sakamoto+NT’s excellent single, Vulinej fell for the song and brought it to JP Soul at Roam Studios. Together they came up with a filthier heavy hitting acid bender.  The second remix comes from Magic Touch who has made a name for himself for his critically acclaimed releases on 100% Silk and Tensnake’s label True Romance as well as his performances at places such as Sonar, Unsound, and the legendary Panorama Bar. His remix of "Lalo" perfectly rounds out the EP in an entirely new direction with elements of atmospheric electro combined with a consistent heady dance beat.