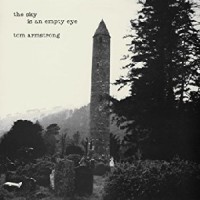 Tompkins Square's recent double-LP, Imaginational Anthem vol 8 : The Private Press shed light on forgotten, impossibly rare guitar recordings spanning several decades. Tom Armstrong's The Sky Is An Empty Eye is the first of several reissues planned by Tompkins Square of full albums by artists featured on IA8. Armstrong's self-released LP from 1987 sports blissed out acoustic numbers like the one featured on IA8, along with some electric workouts and even a deep pysch vocal tune. Tom's main mode of distribution for the album was handing the LP to drunken patrons at a bar in Pinos Altos, NM. Now Tompkins Square makes it a bit easier to acquire.

In his own words, today : I was born in Elmhurst IL, lived there 29 years. Had a brief career playing open mikes and bars for tips, drinks and nominal cash payments, even gave some guitar lessons. In 1984 I was offered a half partnership in an engineering firm in Dallas, so I moved to Texas. Made a big pile of money. My wife bought me a Tascam 4 track recorder for my birthday, I went crazy with it. Recorded a bunch of melodies that had been rattling around my brain since I was 8 years old. Liked what I heard, decided to make an LP. It wasn't too hard to track down a studio to master my 4 tracks. By this time I was an old hand at graphic design for promotional material, so I designed the cover myself. Handed the albums out to business associates, as promotional material for other business interests, at a drunken open mike at a bar in Pinos Altos, NM. I continued to record for about another 10 years, blues rock, pop. Really refined my recording skills. Still play once in while, but I'm an old fart now, with all the baggage that entails.

The Stone RosesThe Second Coming - Back To Black Vinyl Edition