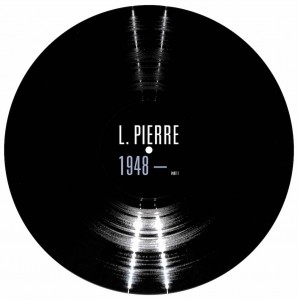 THE ALBUM IS SOLD NAKED, WITHOUT ANY SLEEVE WHATSOEVER.
180G VINYL.
THE LAST EVER ALBUM FROM L. PIERRE
NO DIGITAL DOWNLOAD CARD / NO DIGITAL DISTRIBUTON OF THE MUSIC AT ALL.

In late 2016 L.Pierre (aka Aidan Moffat) posted Melodic this letter below along with a dublate of the his new album '1948 - '

Surprise! This is a new – and final – L. Pierre album, which I’m hoping you and the Melodic team would like to release. Rather than send you MP3s and emails and all those ones and zeroes, I thought it best to post you a dubplate in exactly the way I’d like to see it released. There’s some background to this one, so here you go …

You’ll notice that the record labels state that all the samples I’ve used are from Nathan Milstein’s version of a Mendelssohn concerto – this is what was on the very first 33 1/3rpm long-playing 12” record in 1948. (There was a 33 1/3rpm 10” by Frank Sinatra first, but that was technically a compilation; Milstein’s was the first proper 12” album as we came to know it.) These samples from the original 1948 release were all ripped from YouTube, the biggest free music streaming platform in the world.

I want to release the album as you have it right now: a vinyl-only LP, no digital whatsoever – indeed, upon the release date, I want to delete all the digital source files and any online promo streams we might do (we’ll have to advertise it in some way, of course). And on top of that, I want to release it with no sleeve. There are a few ideas here. Firstly, I don’t want a pristine, digital document that could last forever; I want the music left to the elements, I want it to live and scar, with each record’s acquired crackles, pops and scratches making them unique and identifiable to their owners. And while the natural thing to do with a naked record is protect it, I think it could be interesting to see how folk respond when we hand that responsibility over. Also, the sleeveless LP will look like one of those dusty, vulnerable strays you find in charity shops, which is precisely where L. Pierre began.

Another thing I’d like to do is have a locked groove at the end, adding another wee element of interaction – the album won’t stop until the listener decides it should (which also works as an analogy for the resilience of vinyl in our digital age). And because the death of the album is proclaimed every few months these days, I wanted it to sound like a sort of ironic requiem. The title’s an unfinished tombstone with no date of death: “1948 – .”.

If we do this, it will absolutely, definitely be the last ever record from L. Pierre (there’s that requiem echo again). The End.

Anyway, hope you like it, and I do realise that a vinyl-only, self-destructive dialogue on the value of music and its new platforms, culture’s cyclical nature, the supposed death of the album – and the seeming immortality and inherent nostalgia of vinyl – doesn’t sound like the most lucrative of ventures, but I hope it’s an idea that a few folk might connect with. And I think it sounds quite lovely too!