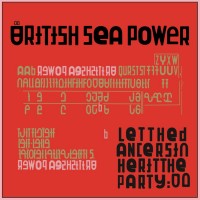 International treasures British Sea Power release their first new material in four years. Recorded in Sussex, London and on the Isle of Skye, it follows the band’s five studio albums for the great Rough Trade Records.

Let The Dancers Inherit The Party follows on from the 2013 album Machineries Of Joy - an album Q praised as “Their best record yet… a triumph of sophisticated rock engineering.” Let The Dancers Inherit The Party sees the band return to the kind of exhilarating and bright-minded guitar music that has seen them nominated for the Mercury Music Prize and which has drawn praise from David Bowie, Lou Reed and the National Maritime Museum, alongside Doctor Who, Harry Potter and Sherlock Holmes (Peter Capaldi, Daniel Radcliffe and Benedict Cumberbatch have all declared an interest in the band).