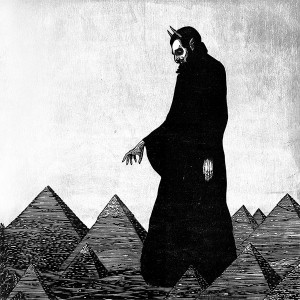 “Divination/Cleromancy/Comes the card that I refused to see” – The Afghan Whigs, “Oriole”

“Cleromancy” isn’t a word one normally finds in rock lyrics. Then again, In Spades – the new album by The Afghan Whigs, from which the new song “Oriole” hails – is defined only by its own mystical inner logic. The term means to divine, in a supernatural manner, a prediction of destiny from the random casting of lots: the throwing of dice, picking a card from a deck. From its evocative cover art to the troubled spirits haunting its halls, In Spades casts a spell that challenges the listener to unpack its dark metaphors and spectral imagery.

On the one hand, In Spades is as quintessentially Afghan Whigs as anything the group has ever done – fulfilling its original mandate to explore the missing link between howling Midwestern punk like Die Kreuzen and Hüsker Dü, The Temptations’ psychedelic soul symphonies, and the expansive hard-rock tapestries of Led Zeppelin and Lynyrd Skynyrd. At the same time, this new record continues to push beyond anything in the Whigs’ previous repertoire – another trademark, along with the explosive group dynamic captured on the recording.

Indeed, the chemistry of the lineup – Dulli, guitarists Dave Rosser and Jon Skibic, drummer Patrick Keeler, multi-instrumentalist Rick Nelson, and Whigs co-founder/bassist John Curley – set the tone for In Spades’ creation. When it came to follow up the band’s triumphant return to recording – Do To the Beast (Sub Pop 2014), which was the band’s first ever Top 40 album, – the die was cast. “This is the first time since Black Love [the Whigs’ 1996 noir masterpiece] that we’ve done a full-blown band album,” Dulli says.

The joys, sorrows, and upheavals of innocence and experience echo throughout In Spades: it powerfully documents where The Afghan Whigs have been, and where they might go next. For Dulli and Curley, it’s a journey that, since their origins as one of the first Sub Pop acts to be signed from outside the label’s Pacific Northwest base, has spanned decades. Dulli notes they were barely in their twenties when they first started the band, and yet here they are, fulfilling dreams long held and frequently realized. “Having a break from the Whigs helped me remember what made it so rewarding,” Curley says. “Over the course of a lifetime, there are constants, and there’s also change. You see who’s dropped off the vine – who’s going in reverse, and who’s still by your side. It’s interesting to see where life takes you, and where it doesn’t. That’s the journey and it hasn’t stopped.”

Barry says: Encompassing aspects of stoner, psych and indie-rock, Afghan Whigs have always veered towards the art-rock end of the spectrum, but this is their most direct and cohesive offering yet. Heavy but highly melodic, full of anthemic highs and measured restraint. A brilliantly formed tornado of rock and/or roll.