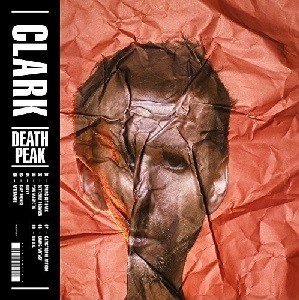 Clark's "Death Peak" drops on Warp, a concept the esteemed producer has been working towards since August 2016. Contrasting jagged and smooth textures, working on ancient rhythms beamed from the future and intertwining euphoric melodies and visceral rhythms of warehouse rave with new vocal and choral elements; Clark sets out a distopic and environmentally degraded world, where space station groans meet ghosts of cyborgs and radioactive new life forms. The record deftly weaves together the various threads of his extensive work exposing the tension in Clark’s musical vocabulary. Grandiose and chamber like in its sound, this could well soundtrack church rituals on new planet systems, and is as vast as it is impressive.

Artwork by Alma Haser, a continuation of her work for Clark that began with the cover for his eponymous 2014 album.

Barry says: Clark has long been a love/hate relationship for me, I've been disappointed at points with what I now believe I just didn't understand, but THIS is another matter. Full of the same sort of spine-tingling seismic shifts that made 'Growls Garden' such a standout track, Death Peak is an absolute stormer. Future leftfield genius this, classic Clark.