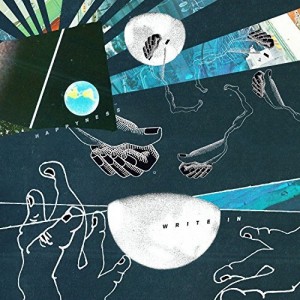 When Happyness first burst into the public conscience with 2013’s debut single ‘It’s On You’, their spirited take on US college rock was as big a surprise as it was an instant hit. The resulting full length, ‘Weird Little Birthday’, went on to feature in many of 2014’s End Of Year album lists. Worldwide tours, an NME Award, a re-issue on much-loved label Moshi Moshi Recordings (Bar/None in US) and millions of plays later, it is with some anticipation now that the band finally reveal the full details of the follow up.

Titled ‘Write In’, released through Moshi Moshi Recordings and featuring artwork from the band’s own Jon EE Allan, the record was made in the band’s own studio above a now-abandoned bookshop, then finished and mixed with Adam Lasus at his LA home studio.

‘Write In’ sets its stall out as an outward looking, inventive and thoughtful progression from their debut. Drawing on an array of influences including Roxy Music, The Beach Boys, Randy Newman, Sonic Youth, Big Star and Pierre Cavalli, the direction is best summed up by Jon EE Allan; “I’d like to think this record looks outside the little American alt-rock sphere we were looking in on. I think we used to be very afraid of being earnest. And now we’re able to be tender or heartfelt without feeling too guilty about it.”

Andy says: A massive, chugging, classic chord-changing blend of a more hazy, sometimes dream-poppy Teenage Fanclub with the rock'n'roll insouciance and charm of, say, Foxygen in their pomp.

Falling Down
The Reel Starts Again (Man As Ostrich)
Anytime
Through Windows
Uptrend/Style Raids
Bigger Glass Less Full
Victor Lazarro’s Heart
Anna, Lisa Calls
The C Is A B A G
Tunnel Vision On Your Part

El VyReturn To The Moon