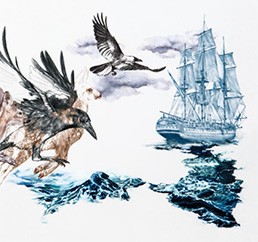 Constellation Records are an important label, they have a host of massively important artists on their roster spawned from another massively important band, and a whole host that weren't. It's an epic and fascinating story which could easily be stretched into a dissertation. Maybe you'd do it better than I did.

Point being, if you haven't heard the bands, you should. If you have, you won't want to hear any of this again, so i'll focus on the music. This is Do Make Say Think's first album since 2009's 'Other Truths', and seventh outing to date. DMST (as they shall hereafter be known to spare another 12k words) create tapestries of sound encompassing aspects of modern-classical, post-rock, jazz, drone and anything else you could name. Their compositions are the exponentially blooming result of boolean logic, exploding one way or the other, with infinite cycles of possibilites, and infinite fields of influence. Take opener 'War On Torpor', for example. Brimming with mystery from the opening dusty tape-saturated guitar and hi-passed rolling percusision, it quickly but succinctly develops into crescentic rock territory before switching out elements almost imperceptibly into a cascade of rhythm and heart-wrenching highs, developed with intent but doomed to stutter out once again. Follower, 'Horripilation' rises like a grooving, writhing phoenix from the ashes, fielding a tinny reverbed guitar and dusty ambience before rolling gracefully around the rhythmic guitar counterpoint and majestic anthemic highs of the mid-section and grooving mind-expanding psychedelic swoons of the latter third. It's a journey, and something you have to believe in. It might not be a standard verse/chorus affair but trust them, they know what they're doing.

The brittle duo of 'Bound' and 'And Boundless' are at once a statement of beauty and a stunning cascade of doubt, bringing together affirming spine-tingling instrumental heft and majestic constructions (Bound) together with skittering pointilism and gothic ambient interludes, minor-key wandering progression and foggy echoed fields. All this before pulling out the undeniable optimism of 'Her Eyes On The Horizon', based around guitar and bass, and minimal percussives. A complete antithesis of everything that has come before it, and only suggested at in everything that comes after.

Every piece on here is more than worthy of mention, and no less important to the story than the one preceding it, but in the interests of brevity i'll refrain from listing all of their nuances. It is safe to say however, that Do Make Say Think continue to be as important to music as they ever were, and their continuing innovation and experimentation. It is jazz that doesn't wander, it is instrumental music that speaks, it is delicate but bold experimental rock, it sounds like every band they've ever been compared to, and every band they haven't. A dichotomic juxtaposition in every sense and a brittle, beautiful, towering mountain.

Barry says: Soaring instrumentals, jagged breakdowns, stunning ambience and grooving psychedelic twists. Bright and beautiful but unendingly complex rhythms, forged through melodies played a thousand times but executed like nothing you've ever heard. From the chamber-rock clanging of “War On Torpor”, to the euphoric post-rock classicism of “Return, Return Again”, this is perfection.