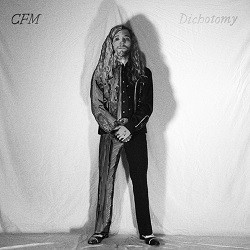 Trust is hard, but trusting yourself is harder. Are the decisions you make the right ones? Is it worth taking risks if there’s no one around to talk you out of it? Is it brave to follow your arrow without knowing where that arrow will lead, or is it better to exercise caution? L.A. punk shredder Charles Moothart wrestled with some of these quandaries while making his second solo album under the CFM moniker, Dichotomy Desaturated. “I love working with other people,” he explains, “But there’s always been that side of me where I’ve wondered, “Can I do this without having someone tell me that it’s acceptable or good?’” Suffice to say, he pulled it off, and with aplomb, too.

This latest release is a toothy, swirling collection of songs that captures a variety of sonic moods—raucous, pastoral, pensive—while retaining an indelible melodic punch. The Laguna Beach-raised Moothart first picked up a guitar at 12 years old and got behind the drum kit for the Moonhearts at the age of 16 with fellow Cali six-string ripper Mikal Cronin. Since then, the 27-year-old journeyman has become a fixture in the West Coast community: he’s logged oodles of studio and stage time with Cronin and Ty Segall—both on his solo albums and as part of the ultra-heavy supergroup Fuzz, the latter experience driving him to make music on his own.

He struck out on his own with 2016’s solo debut, Still Life of Citrus and Slime; a year later, he’s back with this, which marks the first time Moothart’s written songs for the specific purpose of compiling them onto an album. This album embraces relative quiet alongside hardcharging riffs and bursts of incendiary color— there’s plenty of face-exploding moments on Dichotomy Desaturated as well, a sense of mischief that is nonetheless serious as all hell. Just listen to the record— the choice is obvious.