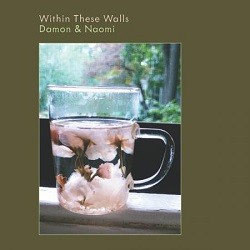 Damon & Naomi have always been a bit more ahead of the curve than is good for them. Galaxie 500 ended before slowcore was a thing. Their psychedelic duo albums with Kramer came out while the Elephant 6 collective were still in high school. They toured the country with an acoustic guitar and Indian harmonium years before there was a New Weird America to receive them. And they made their lushest, most analog album before the vinyl revival. 2007’s Within These Walls came out on CD only, and is only now ten years later being released for the first time on vinyl — the way the duo intended it to be heard.

Conceived as a DIY tribute to the great “mood” albums of Sinatra’s
Capitol years, the album was recorded with real strings, real horns, real drums, and a very very real electric guitarist named Michio Kurihara. It’s a chamber record with ebow and wah-wah, featuring some of the most emotional songs of the duo’s career. “Lilac Land” opens the album in a somber mood, which never lets go. The string section — Helena Espvall, Margaret Wienk, and Katt Hernandez — underscore Naomi’s dark lyrics and melodies. The horns — Bhob Rainey, Greg Kelley, and Kyle Bruckmann — answer with wit and even a bit of joy, but they’ll never win the arguments here.

This album was meant to cast a mood from start to finish, like Sinatra’s classic In The Wee Small Hours, or No One Cares. The album closes with two of its best known tracks: “The Turnaround”, a sweet love song with harmonies; and “Cruel Queen”, a ballad that draws on Damon & Naomi’s respect and knowledge of English folk rock. Sung to a traditional tune, Naomi’s crushing tale of a family gone wrong will keep you guessing till the end, and leave you watching the needle on the outgroove like Frank staring into his glass of rye.