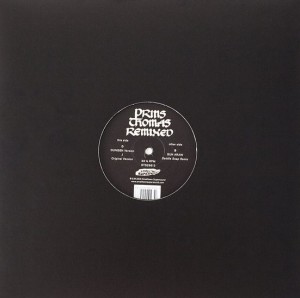 'Ah... where to start... Cameron Stallones aka Sun Araw, besides having the most awesome name ever is a true adventurer in sound. I've been a fan of his for a few years and had no idea what to expect. In his own words, he tried to tame the guitars but "they kept melting away". Dungen is the best band in the world period and having the genius Gustav Estjes handling anything coming from my lesser imagination is a humbling experience. The track "J"is something I worked on for inclusion on the album but never managed to wrap it up, until now that is.' - Prins Thomas.

I have to say, you couldn't get a more Piccadilly Record record - if that makes sense. Three artists we've basically adored since the beginning, all working together to create a fiery broth of Balearic-psyche-exotica which is both monumentally powerful and alluring as hell. Dungen transform "D" into a hymn to the rainforest, allowing evocative flute passages to repeat against strung bass before deploying a concentric drum pattern as we rise above the canopy into the heavens. The side is topped off by the floating grace of "J" in original form. PT's organically evolving arpeggios and synth explorations delicately transporting us through the celestial realms with a caring hand and warm heart. Side B is given up to LA frog-licker Sun Araw who basically ingests a whole host of entheogenic matter and gets thoroughly wacked out and pseudo-spiritual with the stems from "B". Trying to talk about this without being under the influence of psychoactive plants is pointless. Purpose built to soundtrack your next shamanic ritual. Watch out for machine elves!