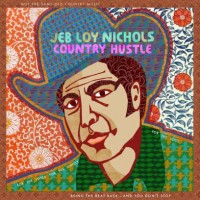 'Country Hustle' is a potent, flavoursome gumbo cooked up from southern soul, country, blues, funk and folk, with a soupçon of hip hop, dub and 80/90s club sounds. It's schooled in the past but is resolutely modern in production, featuring collaborations from Andrew Hale (Sade), St Francis Hotel, Distance and Nostalgia 77.

Jeb originally hails from Missouri and has lived in Texas, New York and London. He has a fascinating, Zelig-like story, all of which feeds into his authentic, experience-infused music. He caught an original Sex Pistols show in Texas, danced to Larry Levan at the Paradise Garage, witnessed Bambaataa rock Bronx blocks.

He worked in New York's Record City, selling obscure James Brown singles to Prince Paul, and Fela Kuti vinyl to Brian Eno and David Byrne - just before they recorded 'Remain In Light' and hung out with Don Cherry in his NY apartment. In London he shared a house with Ari Up from The Slits and Neneh Cherry, and forged a bond with Adrian Sherwood amidst the earth shaking ridims of Jah Shaka's sound system.

Following choice prior achievements including live work with Lucinda Williams and Lambchop, plus his acclaimed 'Country Got Soul' compilations , and recording Tony Joe White, Dan Penn and Larry Jon Wilson - the release earlier this year of his mini album 'Ya Smell Me' (alongside the reissue of reggae gem 'Long Time Traveller' via On-U Sound) saw Jeb gain widespread acclaim. 'Country Hustle' now marks the next phase as his most focussed, ramped-up offering to date.