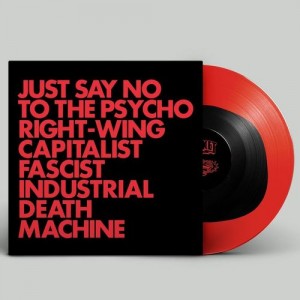 Considering the current political climate, Gnod's newest outing was never going to be a particularly cheery affair. 'Just Say No To The Psycho Right-Wing Capitalist Fascist Industrial Death Machine' is indeed political, it is wrought and angry, and it installs everything you would expect from a Gnod album, and adds to it exponentially. 'Bodies For Money' sets out as a state of intent from the off with a screaming pillar of feedback before launching headfirst into a barrage of percussion and punishing guitar. Settling slightly to leave sonic headroom for an angry muted voice is as symbolic as it is effective, giving the impression of fighting against the tide of noise and crushing weight of the background.

'People' begins much more unceremonoiusly, pitching a looped vocal abstraction against rich and guttoral bass guitar and driving percussion. More akin to the aggressive Krautrock of their earlier years, but injected with a satisfying grit and industrious drive. The vocal segments are layered and amplified, giving the impression of a growing force speaking towards one end. This is music for protest, a soundtrack for forced disillusionment, a call to arms and it is as rousing as it is brilliant.

The clanging of 'Paper Error' quickly becomes one of the more melodic points on the album, eschewing vocal snippets and ambient swells for a deft stoner-rock passage, before twisting and tunring into a rawkous and molten grinding thump. It's towering conclusion is inched upon you, like a frog boiling in water without jumping out.

'Real Man' is rich in thunderous sub-bass, and propelled by galloping drums and a snarling monologue half-sung about our hero, the man in a dirty grey suit with a bag full of beers. Claging old-school punk littered with instrumental passages and cataclysmic breakdowns, screaming and feedback twisted and rolled into a voracious wall of noise and force.

The epic closer 'Stick In The Wheel' grows from a vocal refusal of convention, accompanied by rhythmic guitar stabs and dark-ambient synth work, the constantly propulsive and militaristic rhythm perfectly befits the conventions of the previous numbers, acting as an anchor for the political tumult that preceeds it, before breaking down into a psychedelic and metallic distillation of rage into an eastern-tinged opium den percussive head-nodder.

A driven and direct assault on the troubles of today, and a bold, bracing barrage of musical magma. Caustic, loud and captivating to the end.

GnodEasy To Build, Hard To Destroy