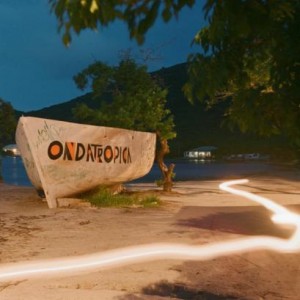 Here is the second record from the widely acclaimed Ondatropica project produced by Will ‘Quantic’ Holland and Mario Galeano. In the words of Will and Mario: “The premise of the second album was to record in Bogota and Old Providence Island (Isla de Providencia). Two contrasting locations, but united by their reputation as musically creative hubs - Bogota, with its subversive underground expressing an active, punky, DIY mentality and Providence reinterpreting and updating a Colombian national identity through a proud renaissance of regional folklore coupled with a fervor for dancehall and reggae sounds. Rather than separate the stylistic Anglo-, French- and Spanish-Caribbean influences, our goal was to explore the common ground and the ways in which these different styles synthesise.' Fuelled by bushy rum, the LP sessions, often including up to 35 musicians, captured the dialogues between Calypso and Gaita, Accordion and Lapsteel, Clave and Mandolin, even synthesizer and a horse’s jaw bone. Beautifully presented as a Gatefold LP and CD with extensive liner notes and photos by B+, this Soundway release is a treat for all the senses.