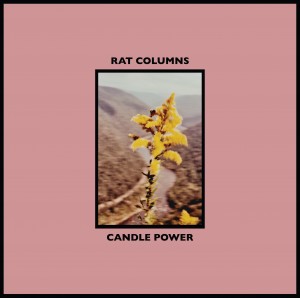 Rat Columns is the mutable musical project of David West, an artist as prolific as he is diverse in his output. West is the driving force behind the groups Rank/Xerox, Liberation and Lace Curtain, he was also a member of Total Control, and most recently debuted a solo album proper.

Whether its forward-facing punk or turning his hand to crafting sleek prisms of pop, West’s credentials check out. Rat Columns is no exception, always central to his vision and returned to many times since its inception in Perth almost a decade ago. Over the years the band has morphed and continued with an array of different friends from the USA and Australia, always finding David West dancing through the long shadows at its core. Working with many distinguished underground imprints including Blackest Ever Black, Adagio 830, Smart Guy Records and RIP Society, Rat Columns have left in their wake a trail of 7”s, EPs and two full length albums. Now a third album, entitled ‘Candle Power’ is cued for release through Upset The Rhythm.

Recorded in Guildford, Western Australia, with the Perth crew of West, Amber Gempton, Louis Hooper and Chris Cobilis, ‘Candle Power’ sees the band's universe of chiming guitar pop explode into new worlds of colour and shade. It’s an album as happy to walk home in the rain as it is to reel dizzily through daylight. It’s melancholic lilt tempered by a quietly-sung optimism. ‘Candle Power’ tunnels further than ever before down the pop mainline, cutting in with moments of soul, disco and experimental plots. West is a magpie-like musician, unafraid to assemble songs from a motley collection of influences and ideas. He weaves songs together with a deft hand and an acute grasp for the memorable yet momentary.

A drumroll sputters to life kicking off the album with first track ‘Someone Else’s Dream’, a bittersweet remonstrance of bounding brightness underscored by West and Gempton’s shared vocals. It’s a song about an inability to let go of the past, sounding defiantly sunny amidst the vivid keyboards, guitar jangle and resolute beat. This knack of teaming up decidedly heartrending subject matter with some of the most affirming music imaginable is a trait well understood by fans of 80’s independent music and it’s safe to say that whilst being a fan himself West can still breathe new life into this approach. “I trail off like Sunday bells, unwanted” sings West on the equally introspective ‘She Loves The Rain’ whilst xylophones and shimmering patterns of guitar interlock in blithe harmony. ‘Time’s No Vessel’ also plays a part in reinforcing this method. Against a dreamy guitar refrain that’s pure Johnny Marr, West laments that he knows “time is no vessel for our love, it’s a dark cloud that rains down from above”.

‘Blinded By The Shadow’ marks an about turn for the album, seeing the record start to flex its motorik muscles with a sequenced bassline and rock-solid drumbeat. The song’s title is sung in a call and response manner that drifts over the dance floor hypnotically. Handclaps, violin and tambourine join a host of percussion to further enhance the captivated groove. ‘Is This Really What You’re Like?’ takes on a similar focused shuffle only with a more minimal demeanour. Whilst, ‘Candle Power II’ takes the disco to the other side of the tracks with its shimmering synths, violin drones and uniform beat. It’s at once mesmeric and meandering, zoning in on the ephemeral theme of the album, acknowledging its sense of transience. The difference between letting go and moving on.

That is what ‘Candle Power’ as an album is reaching for, it is enamoured to the fleeting. That flicker of recognition between one choice and another. ‘Northern Soul’ chases its own heartbeat through lush, sweeping synths and hushed refrains, it’s a heartfelt song in hot pursuit. ‘Dream Tonight’ concludes the album with its propulsive drum machine, searching keyboard lines and effusive bassline. It’s a tour de force of pristine pop akin to New Order in its ability to capture this mercurial feeling, to listen through the music. “You could dream tonight, try to keep an ember alight” West sings repeatedly through the song, before it dissolves into something once there. There’s an elusive beauty in the most short-lived moment and with ‘Candle Power’ Rat Columns breathe warmth across the coals to live in their glow a moment longer.