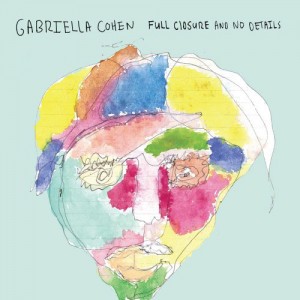 Gabriella Cohen’s debut solo full-length is the product of ten days and two microphones. Co-produced alongside close friend, bandmate and engineer Kate ‘Babyshakes’ Dillon, the record is the result of what Cohen describes as the “ceremony” of reflecting on a relationship.

The album’s raw, personal side could be traced back to its place of birth at Dillon’s parents’ place in the country, or to the Brisbane streets the songs were composed in. The songs are soaked in the kind of aching nostalgia that is tinged with equal measures of sadness and triumph. On ‘I Don’t Feel So Alive’ Cohen warns: “This could be the last time we get together” and on one hand it’s melancholy but it’s in the spirit of endings that are also beginnings. After finishing the record, Cohen and Dillon hit the road down Australia’s East Coast, from Brisbane to Melbourne, a truck full of instruments and gear following in their wake.

There are two sides to Cohen’s coin though - for every moment of raw, cutting emotion, there’s one of otherworldly ethereality. It’s what makes the record feel timeless, which doesn’t mean old-fashioned - it means that the vocoder on ‘Feelin’ Fine’ and the fuzzy, frenzied drums of ‘Alien Anthem’ don’t feel at odds with the dreamy, ambling melodies and old-school ethos at the heart of Cohen’s songwriting.

‘Full Closure And No Details’ is a definitional labour of love: when Cohen talks about her collaborators she sounds like she’s talking about her family - her bass player and backing singers, ring-ins that recorded after Cohen and Dillon finished up in the country, are ‘dear friends’; and Dillon is her ‘sister’. The songs were written on Cohen’s grandpa’s nylon string guitar and ‘Piano Song’ was recorded on Dillon’s parents’ old, out-of-tune upright, the same piano she learned on as a child.

“‘Full Closure And No Details’ is quietly impressive - a slowburning fusion of defiance and heartache.” - The Guardian

Gabriella CohenPink Is The Colour Of Unconditional Love