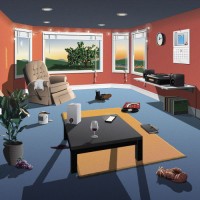 Written and recorded over the past twelve months and produced by the fast rising BJ Burton (Bon Iver, Polica, Low), the record marks a true coming of age for the hotly tipped young band.

Hippo Campus are to tour the UK in 2017, following a near non-stop run since the band’s first dates outside of their hometown back at SXSW 2015, including tours with the likes of Real Estate, Walk The Moon, Saint Motel and Modest Mouse as well as festival appearances at Reading and Leeds and Lollapalooza.