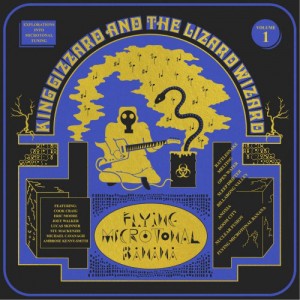 Geelong’s insuppressible King Gizzard & The Lizard Wizard release their new album ‘Flying Microtonal Banana’ on Heavenly Recordings - the first of five albums they are set to release in 2017.

Talking about the making of Flying Microtonal Banana, Eric Moore of the band said: “Earlier this year we started experimenting with a custom microtonal guitar our friend Zak made for Stu. The guitar was modified to play in 24- TET tuning and could only be played with other microtonal instruments. We ended up giving everyone a budget of $200 to buy instruments and turn them microtonal. The record features the modified electric guitars, basses, keyboards and harmonica as well as a Turkish horn called a Zurna.”

Shimmering, hypnotic and propulsive and powered along, as ever, by the metronomic beat of two drummers, ‘Flying Microtonal Banana’ takes a subtle musical shift away from the frazzled freak-beat of its predecessor, ‘Nonagon Infinity’. Trance like, in parts clipped and concise yet deeply psychedelic, it reveals yet another musical side to a band seemingly in perpetual motion.

Perhaps one of the most exciting live bands out there right now, they appeared at both Green Man and End Of The Road festivals over the summer as well as playing sold-out London shows at the Electric Ballroom, Moth Club and The Electric during 2016. The band will bring their unrestrained and free-wheeling live show back to the UK in 2017.

Barry says: K-Gizzle pull out another brilliant and no doubt in-demand album of angular melodies, psychedelic freak-outs and grooving churns of noise, interspersed with funked-up melodies and brilliantly effervescent indie rock. There really is a bit of everything here, classic rock, jazz, psych, noise. You name it, it's here, and executed to perfection.