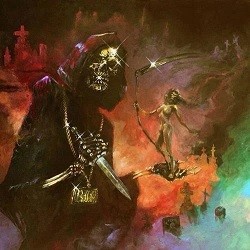 Operating on the belief that heavy metal didn’t come from the forest or beam down from outer space, but rather that it crawled up out of the sewer and writhed to life in the grit and grime of the streets, the four rock n roll freaks of R.I.P. call their sound ”Street Doom” and spread the message with heavy touring across the United States. Obsessed with death and disgusted with the scene, they dragged their knuckles into the studio in 2016 and excavated a debut LP dedicated to fear and trembling, calling it In The Wind.

R.I.P. is defined by fast, regressive riffs, terrified vocals, live shows akin to near-death experiences, and steadfast adherence to the notion that doom isn’t how slow or de- tuned you can play, but the combination of fear, death, and leather. In The Wind is just the right level of down ’n’ dirty guttural rock that cuts and chews with raw fury. The Portland, OR quartet — guitarist Angel Martinez, vocalist Fuzz, bassist John Mullett and drummer Willie D. — echoes the grimy vibe of legends like Saint Vitus, Pentagram and Motorhead , with the no b.s. aesthetic of the early Metal Massacre compilations.