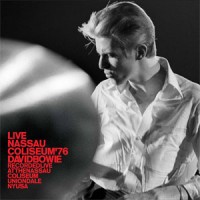 Recorded live at the Nassau Coliseum Uniondale, NY, U.S.A., 23rd March, 1976, the album is the official document of the Isolar/Station To Station tour.

Known to fans for many years as the Thin White Duke double album bootleg (among various other titles), the record didn’t get an official release for over thirty years, when it was finally issued as part of the Station To Station deluxe set in September, 2010.

It is now finally available a vinyl album in it's own right.