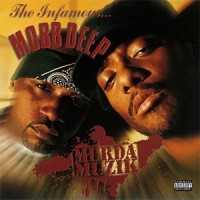 Official Queensbridge murderers, Mobb Deep kept heads nodding and bass bins shaking throughout the nineties and noughties with their dark beats and hardcore rhyming style. Their fourth album, "Murda Muzik" dropped in 1999 and went on to become their most successful release, selling over a million copies and charting high all over the globe. The platinum certified LP finds Prodigy and Havoc expertly weaving a variety of samples around their tough beats, even incorporating snippets of a speech by Ronald Reagan. “Quiet Storm” dexterously fuses Liquid Liquid's "Cavern" and “A Quiet Storm” by soul crooner Smokey Robinson while Prodigy spits fire - e.g. "Fuck rhymes, I write prescriptions." Raekwon, Big Noyd and Lil' Kim all bring it on a feature tip, while Nas and Kool G go hard as hell on "It's Mine" and "The Realest" respectively. Gangsta shit 4 lyf.

Too Smooth ChristWith You In Mind