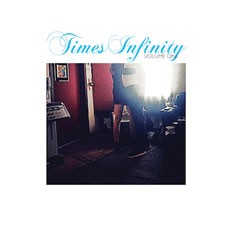 The Dears are an “orchestral-pop-noir-romantique” rock'n'roll band from Montréal, Quebec. They have been active since 1995. Times Infinity Volume One is their sixth studio LP and their first since 2011’s Degeneration Street. The themes covered on Times Infinity Volume One are generally “Romantique” — familiar territory for The Dears; unconditional love, longing, and a debilitating fear of loneliness. The twist, perhaps, concerns legacy, as can be heard on tracks like “To Hold And Have,” “Someday All This Will Be Yours,” and “Here’s To The Death Of All The Romance.” Written over a two-year period, the album was finally committed to audio at the luxuriant Revolution Recording (Toronto) and Thee Mighty Hotel2Tango (Montréal). The sound is described by the band as “both refined and sloppy. At times chill, always trill.” The performance that most captures this characterization is, perhaps, the single, “I Used To Pray For The Heavens To Fall.” The Dears are currently putting final touches on Times Infinity Volume Two, to be released soon after the release of Volume One.