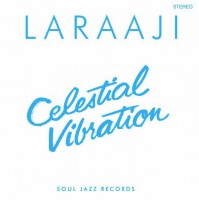 Originally released in 1978 under the name Edward Larry Gordon, "Celestial Vibration", the debut album from Laraaji was first reissued by Soul Jazz in 2010. Re-entering the collective musical consciousness around the same time that Iasos and Ariel Kalma beamed back through our dream catchers, that reissue prompted a widescale re-evaluation of all things new age and ambient. Now Soul Jazz remaster and re-release this hypnotic piece once again, this time on both formats (CD & vinyl) as a fullscale Laraaji release. "Celestial Vibration" is a cosmic journey which sounded unlike anything else when it was first released in 1978. Laraaji’s album was first issued in New York as a private-pressing record with only very minimal distribution. His distinctive use of the harp-like open-stringed zither and kalimba creates a hypnotic trance like musical landscape. Laraaji first came to fame in the 1980s as a worldwide ambient artist working with Brian Eno on EG Records. At this time Laraaji worked with a wide range of experimental musicians - Jon Hassell, Harold Budd, Michael Brook, Bill Nelson, Roger Eno, Nana Vasconcelos and Bill Laswell.  Today Gordon continues his unique musical and spiritual path, performing his music mainly for meditation at yoga global retreats. He runs his own Therapeutic Laughter Workshop where he coaches people in the mindful use of laughing for its health benefits.

Barry says: New-age ambient maestro Laraaji comes back in this week with a reissue of his long-out-of-print debut album 'Celestial Vibration'. Swooning ambience, swirling pads and two tracks of epic proportions. Listened to in full, it's a trip you'll never forget.