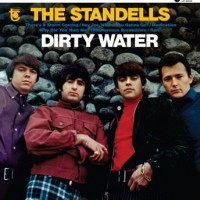 The Standells’ key albums for the Tower label (Dirty Water, Why Pick On Me, and Try It) perfectly bottled a rebellious wave of sound sweeping across Mid-1960’s teen clubs, radio playlists and record racks. Starting with the genre-defining, proto-punk smash “Dirty Water”, through a series of equally memorable underdog anthems (“Sometimes Good Guys Don’t Wear White,” “Why Pick on Me”) and obscenities (the banned “Try It”), the Standells left an indelible mark on their era. Those three Tower albums are a veritable feast of three chord, fuzz-drenched, Vox Organ-driven “squares”-repellant.

The Standells’ Dirty Water album, their first for Tower Records, was primarily recorded away from their Hollywood home base. Producer Ed Cobb picked a Seattle studio and engineer Kearney Barton (the Sonics), unwittingly unleashing the savage Pacific Northwest Sound on the rest of the country. As Standells founding member Larry Tamblyn tells it, “It really was the Standells raw.” The results include crushing classics like “Little Sally Tease,” “Medication,” and “Why Did You Hurt Me.”